The foundation is His righteousness

Then if we are made righteous by our faith in Jesus, then the enemy has nothing in us… and we can successfully resist him and he will and does flee from us. I described how I do that day by day in this post: we go into the promised land gradually. You can do it faster and deal with bigger things if you get together with another believer – because two can put 10,000 to flight. hehehe.

But what does this “new creature” mean? Well, if you choose to, you can confess that your faith in Jesus has completely turned you into a new creature, just as Adam was a new creature, you can exit that old fallen kingdom and become something entirely new – right here, right now. Look at what the bible says:

[Thus you were circumcised when] you were buried with Him in [your] baptism – Col 2:12

This is what it looks like to me, the before and after picture! 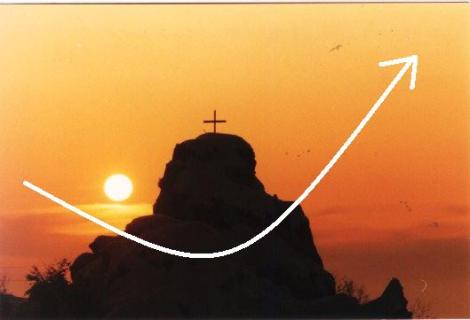 To me there is a before the cross and after the cross. satan stays on the OTHER side, he SIMPLY IS NOT and CANNOT come where you are. You have been made rightoues with Jesus’ righteousness… so resist the devil and send him away from you, from your life, from your finances and wherever else you find the kingdom of darkness is!

By faith you can simply say “thanks You Lord Jesus that I have died with you and now I live with you”. And that is the end of the matter.

Five things to agree with

There are actually at least five things you can say (not including the righteous and justified stuff):

YES! I have died with Jesus Christ: For [as far as this world is concerned] you have died, and your [new, real] life is hidden with Christ in God. – Col 3:3

YES! I have been buried with Jesus Christ: [Thus you were circumcised when] you were buried with Him in [your] baptism, in which you were also raised with Him [to a new life] through [your] faith in the working of God [as displayed] when He raised Him up from the dead. – Col 2:12

YES! have been raised from the dead with Jesus Christ: We were buried therefore with Him by the baptism into death, so that just as Christ was raised from the dead by the glorious [power] of the Father, so we too might [habitually] live and behave in newness of life. For if we have become one with Him by sharing a death like His, we shall also be [one with Him in sharing] His resurrection [by a new life lived for God]. – Rom 6:4-5

YES! I now live with Jesus Christ: The saying is sure and worthy of confidence: If we have died with Him, we shall also live with Him. – 2 Tim 2:11

YES! I am seated with Jesus Christ on His throne: But God–so rich is He in His mercy! Because of and in order to satisfy the great and wonderful and intense love with which He loved us, Even when we were dead (slain) by [our own] shortcomings and trespasses, He made us alive together in fellowship and in union with Christ; [He gave us the very life of Christ Himself, the same new life with which He quickened Him, for] it is by grace (His favor and mercy which you did not deserve) that you are saved (delivered from judgment and made partakers of Christ’s salvation). And He raised us up together with Him and made us sit down together [giving us joint seating with Him] in the heavenly sphere [by virtue of our being] in Christ Jesus (the Messiah, the Anointed One). – Eph 2:4-6

We’re a new kind of creature!

How does this happen?

Well… how did salvation happen? You had faith in Jesus. How did you receive the Holy Spirit? You asked for Him and had faith that He would come. How does this happen? You receive it by faith.