If you read The prophesied changes were long lasting! then you know that Jesus has been doing things. And He is still doing things in my life, it’s a bit of a case of two steps forward, one step back at some times. It baffles me why He would put treasure in this broken vessel.

But we have this treasure in jars of clay to show that this all-surpassing power is from God and not from us. – 2 Cor 4:7

But yet He uses us, despite us. I think when He uses us in our fallen condition, onlookers are forced to realise that it is Him who is doing the miracles. Of that there can be no doubt. Jesus said…

So you also, when you have done everything you were told to do, should say, ‘We are unworthy servants; we have only done our duty.’ ” – Luke 17:10

So onward we go. I really feel I should have posted this a few days ago when I started praying for peace in the DRC.

What is the current situation in the DRC?

DRC-UGANDA: LRA torture of civilians continues – NAIROBI, 17 July 2009 (IRIN) – The Lord’s Resistance Army (LRA) is continuing to kill and kidnap civilians in northeastern Democratic Republic of Congo (DRC), according to the UN. In the first fortnight of July alone, the Ugandan rebel group carried out 33 attacks in the districts of Upper and Lower Uele, killing 26 civilians and abducting 144, according to a report by the UN Office for the Coordination of Humanitarian Affairs (OCHA). Six of those abducted were children. The LRA has a long history of boosting its ranks by kidnapping children, forcing boys to fight and girls into sexual slavery.

Conditions in DRC provinces worsening – KINSHASA, Democratic Republic of Congo, July 10 (UPI) — Conditions in the Kivu provinces of the Democratic Republic of Congo are worsening as residents are being displaced by violence, humanitarian officials say. Max Hadorn, who is heading up the DRC mission by the International Committee of the Red Cross, said violence throughout North and South Kivu in June have challenged regional humanitarian and security efforts, the Integrated Regional Information Networks reported Friday. Since May, security and humanitarian conditions worsened for thousands of civilians in North and South Kivu,” he said.

The conditions there are serious and getting worse. 100-200,000 people have been pushed out of their homes. The UN and many churches are trying to love and care for and rehabilitate the people. Yes hopeand love and faith are all important, and for sure love it the greatest… but unless the war stops, their efforts won’t take root.

That is where your faith comes into the equation!

You and I know Jesus Christ did what it takes to bring peace to this part of the world. Would you join me time in this of declaring the finished work of Jesus Christ in the DRC please?

You need faith. What is faith?

You need to have faith. It is our faith that overcomes the evil in this world, according to 1 John 5:4. What are some of the characteristics of faith? Here are 6 suggestions of how to have faith in His finished work.

What can you learn from those classic scriptures about faith?

For example No 1 says you must be convinced of the reality of His finished work. No 3 says your faith in His finished work will overcome the evil that is at work. No 4 says you simply agree with what He has already done, you don’t do it, you simplyagree it HAS been done. No 5 says you contend for it, your prayer is like a struggle, it’s not alimp declaration, but a firm YES.

No 6 says that is you choose to read the bible and hear the good news, but you don’t contend for the faith, if you don’t add your amen… then nothing changes.

Here is a bit about the DRC 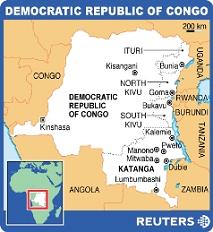 CONGO CONFLICTS DEFY PEACE – Democratic Republic of Congo’s five-year war officially ended in 2003, but the country is still regularly listed as the site of one of the world’s worst humanitarian crises. Congo should be rich from its gold, diamonds and minerals, yet millions of its people suffer from a lethal combination of disease and hunger caused by ongoing conflict and displacement.

8 NT scriptures to agree with…

Several OT scriptures describing what the Messiah would do – which you can agree with (Is 25:4-8)