Some time in 2008 I felt God was saying this point had been reached:

Then in 2009 I blogged that I believed that God was making two prophetic claims:

One of the key things I have waited a whole year to find out is this: are our prayers resolving the problem of sin or are they just suppressing them – which means that the problems will resume when we stop praying?

It’s now one year later and I’m watching the hurricane season with interest.

Did you see the cost of that season? 41 BILLION. Now imagine being able to pay for the healthcare changes with that savings this year and subsequent years! That is why I keep saying that it is fiscally irresponsible to not support what God is doing. Support it, support Him – it’s good for your budget! 🙂

The pre-season prediction for 2009 was: 2009 Atlantic Hurricane Season: Up to Fourteen Storms in This Year’s Forecast!

What was the activity level in 2008 near the end of  July?

The trend was for the season to start earlier and earlier with more violent storms, costing more money. So here we are in 2009, two months into the official season (1 June – Nov 30) and this is the current situation worldwide: nothing!

None. None. None. Say it with me. None. It kinda boggles the mind doesn’t it?

I believe that the signs are in the earth for this momentous change to peace. God said to me there would be an increase earthquakes. I bravely blogged it. That turned out to be enormously true… 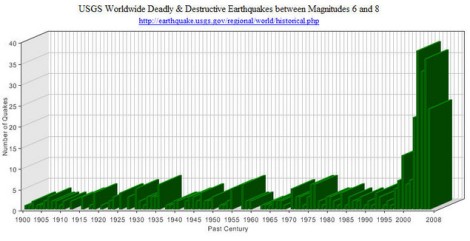 And even the earthquakes we do have aren’t doing vast damage which would be normal for a 7.8 earthquake…

New Zealand Shaken Not Stirred by 7.8 Magnitude Earthquake – At 0922 GMT an earthquake hit off the west coast of New Zealand’s South Island. The quake was centered approximately 100 miles off the coast. Reports indicate no serious damage or injuries occurred. The quake triggered the Pacific Tsunami Warning System. The warning was canceled after readings indicated the waves generated from the quake where only 8 inches in height.

(Check out this cool graphic of the fault line)

And so now we may be beginning to see another sign that the earth is gradually coming to a state of peace (prophecy: An end to conflicts and revival) and that proof that seems to be occurring is that there are no hurricanes anywhere on the earth. It’s too early to be sure about this, but it looks like it’s heading that way.

And what about wars? I think that when the earth is released from the weight of sin and death, the earth itself immediately changes and behaves differently. Action and response.

But people are more complicated. They take longer. We hold grudges long after the situation has changed, we have fixed viewpoints and pre-conceived expectations which may not match the reality around us. Things may have changed, but we may not want to. And then again, there is a growing hope for peace in the DRC: Congo’s people ‘yearning’ for peace

And there is some hope for change in Afghanistan: Afghanistan ‘agrees Taliban deal’. This deal is not as exciting as it sounds, because it is NOT in the very violent border areas. But still… it’s the beginning of progress towards peace. Another excellent change is that the Taliban have brought out a code of conduct. This change means less informal madness and more centralized control. One person to make a deal with. A leadership structure which can limit the mayhem.

So while the earth appears to calming down slowly, human beings need time to change their entrenched behaviors. In democratic countries the changes are publicly measured in 4 year cycles. In an autocracy they may never be publicly measured. But this is a time to walk by faith, not by sight 🙂

For we walk by faith [we regulate our lives and conduct ourselves by our conviction or belief respecting man’s relationship to God and divine things, with trust and holy fervor; thus we walk] not by sight or appearance. – 2 Cor 5:7

A quick guide to how the world works

For those who want to understand the basic theology behind how we came to be in this mess and how we will come out of it,  start by reading Lev 18 (note the “do nots”) and then take note that the consequence is that the land becomes “defiled” and if it becomes defiled enough then it “vomits” it’s inhabitants out.

A religious person would leave it at that and smugly decide that the world had it coming to them and walk away assured of their own sinlessness. However. I do not have that luxury. As I have shared in this blog, I have been through and done and have been on the receiving end of a lot of sin in my life. And some of those addictive behaviors persist now, still.

But in my weakness He is strong…

But He said to me, My grace (My favor and loving-kindness and mercy) is enough for you [sufficient against any danger and enables you to bear the trouble manfully]; for My strength and power are made perfect (fulfilled and completed) and show themselves most effective in [your] weakness.

Therefore, I will all the more gladly glory in my weaknesses and infirmities, that the strength and power of Christ (the Messiah) may rest (yes, may pitch a tent over and dwell) upon me! – 2 Cor 12:9

I don’t glory in my ongoing sin, I certainly wouldn’t want to re-live my past sinful life, but I’m soooo glad I went through it. Why? Because I learned through my own experiences that people are helpless to help themselves.

But there is good news. That’s how we came to be in this mess. Now let’s discover why we are coming OUT of this mess…

You see, at just the right time, when we were still powerless, Christ died for the ungodly. – Rom 5:6

But God demonstrates his own love for us in this: While we were still sinners, Christ died for us. – Rom 5:8

Look again at that verse… did Jesus Christ die for believers, or for sinners?

Religious people will react to this and claim that “God doesn’t wink at sin”. Let me be the first to agree: He didn’t! The full weight of sin was carried by Jesus Christ and the full vengeance of God for that sin was placed upon Him. God didn’t wink at sin at all, God knew we would remain in bondage to it forever unless He intervened, so He dealt with it through Jesus Christ

AND – importantly – He forgave us…

The bottom line… receive it!

Sin created the power called death. Death then overwhelmed the earth all people in, enslaving us to itself (wars, racism, rape, murder, adultery, excessive greed). But God placed all sin upon Jesus Christ and He died. By resolving sin, He also resolved death.

And what we need to do is receive this truth – that Jesus Christ died on behalf of the ungodly (you and me) – and how do we receive this? We receive it by faith.

So the promise is received by faith. It is given as a free gift. And we are all certain to receive it, whether or not we live according to the law of Moses, if we have faith like Abraham’s – Rom 4:16

You need to have faith like Abraham… what was it Abraham believed?

This happened because Abraham believed in the God who brings the dead back to life and who creates new things out of nothing. – Rom 4:17

Yes God, I believe You brought the dead back to life through Jesus Christ, just as You breathed life into the dry bones in the valley: Ez 37:1-14

One response to “So far, so good in our progress towards peace”