These last two days were pivotal in ways that can’t be seen just yet. It’s a change that is for the good of us all, I need to add! 🙂

I just had a 36 hour fast of food and water… the food was not my choice, it was because my money ran out (again! *sigh*) but the water fast was unexpected. I simply had no desire to eat or drink at all during that time.

In the days before I had a dream showing God using His sword. Then I saw a lean animal. Then the fast began. Then last night after a long sleep I woke up and as I lay there I kept seeing flashes of bright light – I have seen these before.

Then saw a vision of thousands of grey colored evil characters who seemed to be leaving Heaven, or at least they were leaving the heavenly realm. I saw a hole high up in the sky and pouring brightly out of that hole was a pure bright light… and these creatures were descending out of the hole. The behaved like an army, two or three wide and in a long orderly line.

They came down to Earth and I saw the one in front had an ax… naturally I immediately assumed that they all did! These guys began to look around as if they were about to attack. I just knew that I had to take action! So I confronted them and spoke the gospel aggressively at them. I was using the sword of my mouth, just as Jesus Christ spoke the words scripture against satan in the wilderness to defeat the devil.

I told them that I know from the gospel in the bible that they have been visited, conquered and put into the pit by Jesus Christ.

I declared to them that sin is abolished and set aside, and death is anulled because of the work of Jesus Christ on the cross.

I let it rip, gave them both barrels, I didn’t hold back!I stood on what He has done.

I repeatedly told them that Jesus Christ had led the captors captive and they have been sent to the pit. (They were the captors of humanity… they are now the captives under Jesus Christ)

And wouldn’t you know it… they simply went to the pit! Poof. Gone. Suddenly they weren’t here in our streets about to vandalise us and our lives! They were gone down and there was just some kind of mess on the ground, like a dirty residue.

** And the audience went wild, breaking out in cheers! **

This is not (at all) my first encounter of this nature, but this was by far my boldest and it was the most effortless and it dealt with the most number of enemies in one go.

And today I found scriptures – again in Isaiah – that explain what happened.

And then I remembered how this is the inverse of what I saw in 5 days before Christmas in 2000. I was in Manly and I heard God speak a promise to me about my life.. and at the same time I saw countless of these creatures rise up out of the earth. I was very confused. The promise was distinctly good.. but what I was seeing looked distinctly onerously bad!

The release of these things is described in the book of Revelations. I didn’t know that until I read it much later, around 2006 perhaps.

But their effect on this world was undeniable, Time Magazine even wrote about it! 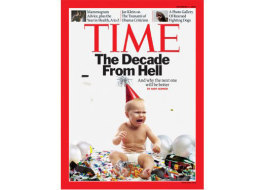 Time Magazine - The Decade from Hell

If you are interested, Time also posted a “moving cover video” which is kinda fun. (In the video the baby is animated and confetti is dropping down.)

Indeed it WAS a decade – literally – from hell.

But that is over now.

Would you like to learn to have overcoming prayers?

The key is to recognise that Jesus Christ used scriptures to defeat the devil in the wilderness, and we must do the same.

He didn’t use scripture to heal people, He used His authority (everything had been placed in His hands). But first He overcame in the wilderness using the words of God in scripture.

What you believe Jesus Christ did on the cross matters – that is your faith… and it your faith that overcomes the evil in this world!

For every child of God defeats this evil world, and we achieve this victory through our faith. – 1 John 5:4