I was chatting to a local yesterday and he commented that even with a global recession, South Africa has been spared. He called it a “miracle” and He is right. Take a look at the facts…

On April 30th 2009 I blogged a prophetic words God had given me about “Manufacturing for South Africa“. It was a brave word if you remember that the trend was solidly downward right across the world.

Just like with all of the other words He graciously gave various countries, this one bucked the trend and came absolutely true. That graph is from this document: Manufacturing: Production and Sales, March 2010. You can visit that document on the government site to confirm it.

The trend down is visible, the trend up is visible. What more can I say? Let’s hear it from the experts…

The figure came as a surprise to most economists who had forecast a 3.1% rise.

“The figures were very surprising and shocking. We were the lowest with a forecast of 2.7% and I think most analysts were caught off guard,” said Freddy Mitchell, economist at Efficient Group.

“Trade figures show that we recorded a surplus of almost R500 million in March, telling us that countries abroad are demanding more of our goods,” added Mitchell.

Think logically about this

I am absolutely sure that this miracle and the many others recorded on this blog (and in this document below) is to assure you that Jesus Christ is capable and able to turn around even the worst scenario.

There is simply nothing that He cannot do. And in the time we are about to enter, we must come to grips with this truth. He has shown Himself to be Lord over weather, rain, deserts, hurricanes, lakes, economics and more.

I’m not asking you to have faith… I’m asking you to be logical. The trend in that graph is utterly clear. Faith in Jesus Christ overcomes the evil of this world.

I feel this is one of the last times I will be showing you again and again that He can help us. Shortly things will turn and we will be in need. And those who are willing can come to Him for the exact help that He has willingly demonstrated in this graph over the last year, and in all the other miracles that He has done.

Goats rely on their own ability to scamper up rocky ledges away from predators. Sheep come to a Shepherd for protection from predators. The predators are coming… are you a sheep? Is your country a sheep? Will you come to the Shepherd Who can produce the results you have been witnessing on this blog?

Previous posts about this prophecy can be read here…

And just in case you are still following the whole rivers and lakes in Australia thing, check this out: Lake Eyre current flooding levels! 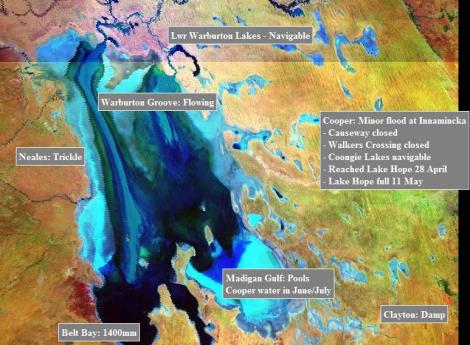 Profound isn’t it? Nothing is impossible for Jesus Christ… and we must make plans to run to Him. This time of Him showing off what He is capable of, is almost over… or over. It’s up to us to put on our “logical hats” and when things change… consider coming to Him for assistance.

And just to catch you up… yes the flooding continues… and take a look at the new additions! Conflict zones such as Somalia, Mexico, Zimbabwe, Morocco, Rift Valley areas, Sri Lanka, Yemen and more!

NOTE: And now floods in Auschwitz (where horrendous evil was committed during world war 2)

For the earth will be filled with the knowledge of the glory of the LORD, as the waters cover the sea. – Hab 2:14

They will neither harm nor destroy on all my holy mountain, for the earth will be full of the knowledge of the LORD as the waters cover the sea. – Is 11:9

Be sheep, not goats!

Again I say to you, be prepared to come to Him and to His Shepherding. He has clearly shown His authority over everything in this world. What He has done, He can do again.

For more posts related to our need for Shepherding, please read these:

4 responses to “Manufacturing for South Africa and other prophecies – one year on!”