On Oct 26 I was interceding and I saw a vision. I wrote about it on my FB page (not my personal wall). I tried to find an image which captured the vast amounts of stuff pouring in…

On Oct 28 after getting quite a few enquiries for more information, I tried to expand on what I had seen, so I wrote another post to my FB page (not my personal wall) explaining the vision I had of great amounts of evil flowing into a massive long crack in the ground. 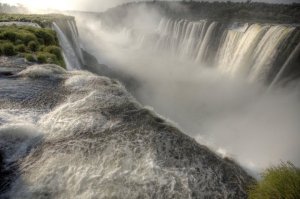 The key scriptures that I felt it related to are these…

I have been praying these scriptures for many years, off and on. The target of these scriptures is never people or religions or anything like that, it is always the evil spiritual forces which entrap this world and keep people blind, deaf, addicted, in poverty and so on.

Then on Nov 3 I wrote that was utterly gob-smacked to be sitting at the Waterfront and see a video playing in front of me as I sat eating my chicken… the video contained the exact image that I had seen in that vision. As I watched the water rushing into the vast crevasse my mouth hung open. I had seen this about 8 days earlier. I had written about it in FB twice and now here it was in front of me.

The big difference between the movie and my vision is that in my vision the water was black and it contained black things and objects. I knew it was fulfillment of scripture, I knew that black stuff was pouring away into the “pit”.

Just a few days ago on the 16th Nov I wrote on this blog (see: Infinitely beyond our highest thoughts, hopes or dreams) about the Holy Spirit giving me a “new prayer” – and it’s time to share that with you.

In that day the Lord will punish the powers in the heavens above and the kings on the earth below.

They will be herded together like prisoners bound in a dungeon; they will be shut up in prison and be punished after many days. – Isaiah 24:21-22 (NIV)

The Amplified expands on v21 in this way…

And in that day the Lord will visit and punish the host of the high ones on high [the host of heaven in heaven, celestial beings] – Is 24:21

As I prayed this I knew within myself that the interpretation of God punishing kings of the earth is not the focal point.  The focal point is that all spiritual evil is being removed. Literally washed into a pit. Taken hostage. Put in a prison.

That is the same as my vision! When I saw the vision I knew what this was about and now with these scriptures it indeed is about that.

What does that mean?

Let me expand on that…

If you are into studying the Hebrew (as I am) then here is an awesome website for doing that:

Just in case that site disappears (like so many of the pages that I link to) I will keep a copy here:

I have not found any commentaries that match what is really occuring in the world – as demonstrated by all the amazing works that the Holy Spirit is doing. But that is not surprising…  how could they? They were speculating based on their era, their time, their political-social-economic world view.

But we are here now. We can see the Holy Spirit has called us to pray for an intractable Afghanistan situation and only 6 weeks later they have had a peaceful election and research shows Afghanistanis are feeling more optimistic and many of the warring parties are reintegrating with society and are holding peace talks.

A recent poll reveals that many Afghans actually believe things are getting better — slowly, to be sure, but improving despite the odds. – The Afghan View, NY Times

The trend over the years was utterly clear…

Foreign forces in Afghanistan are facing their deadliest year yet, with the death toll already passing 500, as compared to 521 for all of last year. – 2010 to be Afghanistan’s deadliest year – By South Asia correspondent Sally Sara in Kabul – Posted Tue Sep 7, 2010

With a trend like that it HAD TO be the Holy Spirit Who was saying that He could work through us to stop this spiral of violence.

And He did it!

The violence is not ended, but the spiral – at least from one side – has been somewhat curtailed. The possibility of negotiations were an impossibility before and now they are occuring… to some extent.

On the other hand some people make a different point: In Afghanistan the militants talking peace aren’t the ones making war. Nevertheless, when the second (Hezb-e-Islami) and third largest (Haqqani) militant groups want to talk about stopping the war, that is a very good thing. And did I mention a largely peaceful election? Huh? Huh? 🙂

So where did this start? Let’s go back to the start.

Many years ago the Holy Spirit (AKA God) prophesied rain for Australia. This was during a time that I personally met with Australian government employees who were telling me that the population will have to get used to seeing rock gardens as “beautiful” because there is no hope of getting water and the situation was considered permanent.

Australian farmers were suiciding. Farmers were no longer selling their animals, because no one else was buying them, so they were simply killing them in vast numbers. The banks had given loans year after and this year they announced there would be no further loans.

And the rain came – just as the Holy Spirit said. I personally sat at Angus Buchan’s Mighty Mens Conference in Perth 2008 and listened to relieved men talk about the rain. If they had not got that rain which they prayed so hard for, then the Australian wheat belt would have ceased to exist.

Then the Holy Spirit upped the game and prophesied rivers and lakes appearing in the desert – and from that night onwards (I think it was 28 Sept 2008) the rain poured and poured!!! Vast numbers of lakes and massive rivers that had not run in living memory appeared in the middle of Australia. Those rivers drained down into Lake Eyre. Rivers and lakes appeared in the desert – just as the Holy Spirit said it would!

The impossible just kept occuring and the Holy Spirit kept increasing the promises – and then achieving them!

Iraq and the DRC

I say quietened as they did not become completely calm. However, the DRC was quiet enough for Hillary Clinton to visit the heart of the troubled area (Kivu) in late 2009… so that says something if one of the most important people in the world can visit the epicenter!

Now we have prayed for Afghanistan in 2010 – and that is undeniably quietening down. Did I mention the peaceful elections? Huh? Huh?  😛

So can we see a trend?

So then… if the Holy Spirit leads us to pray for ALL SPIRITUAL evil forces to be arrested, bound up and put in a pit… releasing this world into peace and freedom… who thinks the Holy Spirit and YHWH and Jesus Christ (the Lord of Hosts) can do it?

And who is silly enough to deny the evidence and say He can’t do it?

(And yes I still believe Edom will occur – unless this IS a spiritual Edom? But I honestly don’t think so).

Would you like to intercede for peace in your country or in the world? All you need to do is get a map of the area you want to pray for and get this list of scriptures (or download the MS Word version) and speak each scripture out over the area you are praying for. It’s as easy as that.

3 responses to “The new prayer – gird up your loins my friends!”