This is a part of a series about forgiveness and handling memories, first to last

PLEASE NOTE: This is not related to any specific situation or any individual or group of people in my own life or in my past. If you know me… DONT take it personally. It’s not about you.

So let me begin… 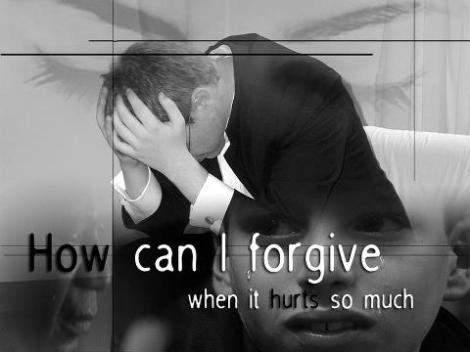 Firstly, I want you to know…

1. I know how hard forgiveness is when you have been deeply wronged

Let’s say you were in a relationship and your partner hurt you. Not once. Not twice, but ongoingly. For years you were hurt, either physically or emotionally or both.

Then you spoke to well meaning Christians and they said “just let it go” or “you need to forgive to be forgiven” or “if you walk in hatred you walk in darkness. All of this is valid scripture… but is it helpful?

Job’s comforters also had good advice, but they were rebuked by God.

This is tough stuff… how can you forgive someone who hurt you, and if they were given another chance they would hurt you again, they never apologised, and they might be hurting someone else right now – at this very moment?

Child abuse comes to mind… perhaps you were abused and your abuser has never been caught and that person might be abusing others at this time. Should you forgive and forget? Is God OK with what happened?

Let all bitterness and wrath and anger and clamor and slander be put away from you, along with all malice.

Be kind to one another, tenderhearted, forgiving one another, as God in Christ forgave you. – Ephesians 4:31-32

… but you cant imagine just pushing all that stuff under a rug and pretend that its gone and somehow its all ok now. When you bury stuff alive, it doesnt die, it’s still alive down there.

Perhaps you grew up with sexual abuse and no one ever apologised to you for it. Can you just forgive and forget? Should you go and be kind to those people and tenderhearted to them? God bless you if you can do that, you have probably had years of counselling and you are ready to do that. This post is not for you.

But what if you are really stuck and you can’t “just let it go”? Then this is the post for you.

Firstly I wanted to start with this… I want you to know that I know how it feels.

So what now? Here is the second part where I explain…

2. The kind of peace God wants you to have

Let me show you what God showed me early last year (2011). He showed me two images. I will repeat them to you now.

The first image He showed me… I saw God as a Father and me as His son (which I am). The son was having problems with another kid at school. The other kid goes on and on at the kid, hurting him.

So the son now has two options.

The first option is to fight back and smack the other kid so hard that the other kid never ever does that again. This is not the way described in the bible (despite it seeming to work quite well and lots of people doing it in the bible).

The second option is that the son comes to his Father and explains what happened and the Father goes to the other kid’s parents and explains what is happening to you and they do something to stop the situation.

What God showed me is that He (the Father) is a good Father and He steps in and protect his son (or you, a daughter) and He will arrange for the other child to get a punishment severe enough that the bad behaviour stops occurring.

If you know that you have a Father in Heaven like that, you will be able to take all the issues to Him (in prayer) and know for certain that He will intervene and judge the situation correctly and hand out the correct response needed to protect you and bring justice.

Well… you DO have a Father in Heaven like that and in a moment (below) I will show you that scripturally.

The second image He showed me… was of a son feeling peaceful. I can still remember the sense of peace of that son.

The son could let it go BECAUSE he totally trusted that his Father would intervene and make a judgement and hand out an appropriate sentence.

The sense of peace in that son was the thing that got me. The son was calm. No angst at all. I really mean it, none at all.

Rather than fight back, the son had  handed the situation over to God and all the tension and anger was removed.

Why was the emotion removed? Because he knew the injustice would be dealt with.

You see, when you are safe and away from the situation, when you have boundaries in place… then it’s the sense of injustice that upsets us and blocks us from forgiving. Its as if we think something like this: if I forgive then he or she gets away with it and THATS NOT FAIR!!!

But if you knew – scripturally – that God will step in and handle it, then you could give the sense of injustice over to Him. THEN you can let it go, as you watch the outcome.

So we come to…

3. How to let go and know that the person wont “get away with it”

The key for you is to NOT take revenge. Yes defend yourself and move away from the source of trouble and put up good boundaries… but dont take revenge. Let it go because God will take action.

So I did exactly that. I did not take revenge, I opened the way for God’s wrath instead.

Did you hear that? Maybe read that last sentence again. I said to God in prayer something like “I forgive these people and I open the way for Your wrath instead”.

It’s as if I had two choices… I could fight, scratch and bite and be angry.

OR. I could forgive and be 100% sure that God would judge and be wrathful (if He found it necessary of course).

I cant have both. You cant have both. It’s as if He waits for us to stop. When we let it go and choose to be peaceful, then He takes over and judges the situation and takes action.

I have a vision right now of someone taking a whole lot of brown tangled emotional stuff out of their chest and lifting it up to Him. I hope that is you 🙂

This approach I am suggesting is confirmed in this verse…

You DO protect yourself, but you DONT pay them back.

I did this in prayer and I felt peace and I have ever since! I feel no need to talk to anyone about it. I dont threaten. I just hand it over and go on with my life.

I can let it go now, because I know that the injustice of the abuse in my past are being handled by my Father.

You can also see Him as a Judge – the bible has many stories and parables of God as a Judge.

This is how I re-processed the injustices of my life in general and found peace with them. I thought about the situations, people known and unknown, and I “opened the way for God’s wrath”. And I felt and feel release. Peace.

Encouraged? Good. BUT. Let me clarify the small print.

Yes, there is always “the small print”  🙂

One time I remember handing a situation over to God and I waited to see what would happen… and the person was… BLESSED!!

A person may think their own ways are right,
but the Lord weighs the heart. – Prov 21:2

When I thought He should take action on my behalf, He judged fairly, He saw what I cannot see in the situation… and He chose to bless instead.

And Im ok with that. Totally. I dont know what is going on in the other person’s life. I am not qualified to judge them and where they have come from. I dont know how they have changed since I last saw them. I dont hear their silent prayers to God. I dont know their heart. But He sees all of this.

I now know that when I forgive, Im asking Him to judge with the insight that only He has. He can see all the factors in the situation and I can’t. I hand it into His hands and Im satisfied that He knows best. I trust Him.

And Im ok with Him blessing on that occasion  because as I said, the real issue that gnaws at us is injustice. If I know He will judge with justice and accuracy… I dont mind what outcome He decides on, I just let it go and move on with my life.

Who knows? Perhaps he will give you a reprieve, sending you a blessing instead of this curse. Perhaps you will be able to offer grain and wine to the LORD your God as before. – Joel 2:14

That verse doesnt fit in with this post, but I feel to add it. If it’s for you, take it, believe Him.

13 responses to “How can I forgive when it hurts so much?”