Last night while deep in worship and in Gods Presence I saw a vision. It was absolutely clear.

I saw three elements in the picture. One to the left, middle and right.

To the left were citizens (people). To the center was government and under it was the power base of big business. To the right was foreign aggressors.

To the left are the people of the nation… the natural power base of any government… but I could see another up-over-down arrow from the center across to the left and the arrow meant that the government has been oppressing the people. The Occupy movement seemed to sit above that power base. 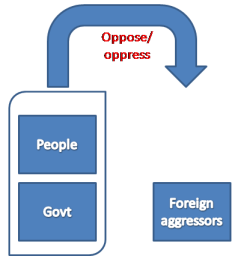 That was what I saw in the vision. I (Mark) would love to add all kinds of words onto this, but that is what I saw. Im sharing it “as is”.

NOTE 8 Dec 2013:  This was originally written on 11 May 2013. Since then the NSA and other agencies have been revealed to be treating citizens of the world as… Im not sure how to describe it… as threats, terrorists, inmates?

The rift between citizens and governments is huge.

“During the prosecution of Manning, the District Attorney said about WikiLeaks that they are ‘the intelligence agency of the people,’ and I consider this a big compliment. It is a phrase I used years ago to describe us. This is what we are: spies for the people. If states have their intelligence agencies to spy on us and control us, should the people and history itself also not have their own counterintelligence?” – Assange in Assange explains why ‘small publisher’ WikiLeaks beat the Pentagon

Making things even worse is the supra-national TPP and TTIP agreements which strip countries of their elected democracies by placing secret agreements above the elected members of parliament and above the laws of sovereign nations.

The gap between governments and citizens could only be wider if countries began to literally be run as a state prison. The gap must be reconciled. Leaders must urgently find ways to return the country to governance by the people and for the people.

One response to “Vision: Government and citizens to be reconciled”