these are supporting posts

What boggles my mind is the clear identification that our Father God has with His Son Jesus Christ. But before I explain that, let me first show in scripture the many ways God has identified Himself.

He surnames Himself by us, and we by Him

He surnames some of us by Himself (Is 45:4) and allows us to surname ourselves with His Name (Is 44:5). This is amazing. A woman only changes her surname to her husband when they become one. Peter changed his name only because Jesus Christ (God) renamed him. It’s a rare and intimate thing to identify yourself with someone else’s name.

He surnames Himself with a family line

But wait… there’s more… God goes further and identifies Himself very clearly by using some of our names “I am the God of  Abraham, Isaac and Jacob” showing the exact lineage that He is supporting.

He identified His own Name with His Son’s sacrifice

Don’t you agree with me… all of this is quite incredible? God may seem distant and far away to some of us, but on closer inspection He is highly relational.

But. It boggles my mind that God said His Name and then explicitly said “this is how I should be mentioned in every generation”… and somehow we refuse to call Him by His Name?!

Imagine if I introduced myself to you and said “Hi, my name is Mark” and you started to call me by some other name out of respect for me. That would be weird wouldn’t it? Im deliberately revealing myself SO THAT I can come into relationship with you, but you ignore me out of “respect”. It’s a bit twisted don’t you think?

“As an expression of the infinite greatness and majesty of God, it was held to be unpronounceable and hence was replaced during the reading of sacred Scripture by means of the use of an alternate name: ‘Adonai,’ which means ‘Lord.'”, However “until almost the year 200 B.C., the divine name was pronounced every morning in the temple in the priestly blessing: ‘The Lord bless and keep you: The Lord make his face to shine upon you, and be gracious to you'” (Numbers 6:24-26)

And it would appear that toward the end of the period of the second temple — 70 A.D. — the high priest now only pronounced the word in a whisper. This was explained in a childhood memory of Rabbi Tarphon (1st-2nd centuries), who recalls that even straining to hear, he could not hear the name.

NOTE: Parts of the following is largely taken from this blog.

Ex 3:15 – And God said further to Moses, “So shall you say to the children of Israel, ‘The LORD (יְהֹוָה) God (אֱלֹהֵי) of your forefathers, the God of Abraham, the God of Isaac, and the God of Jacob, has sent me to you.’ This is My name forever, and this is how I should be mentioned in every generation.

Exodus 3:14 is usually Translated as “… God said unto Moses, I AM THAT I AM (אֶהְיֶה) : and he said, Thus shalt (אֶהְיֶה) thou say unto the children of Israel, I AM (אֶהְיֶה) hath sent me unto you.”

The Holy Name in Hebrew letters is spelled yud – heh – vav – heh and looks like this: (read from right to left)

YHWH , the Tetragrammaton is composed of :

-Yod or yud was anciently portrayed as a symbol of a hand [yad in Hebrew]. This is the entire hand, or closed hand [in contrast with the letter kaf, which comes from the pictograph of the palm of the hand]. The closed hand denotes power and, figuratively, ownership.
-Yod is masculine. In the sacred name Yahweh, it is representative of the Father.
-Yod is the seminal letter of the Hebrew alphabet. It cannot be divided into component parts, like other letters can. It signifies the oneness of Elohim.
-The yod is the smallest [and most humble] letter. From it, the other letters originate. It is symbolic of creation.

-The letter hey is feminine, and represents femininity and gentleness. The first hey in the Name is representative of the Mother / Holy Spirit / Eloah.
-Hey means ‘behold’, ‘to show’ or ‘to reveal’.

-Vav is also masculine in gender.
-Vav signifies a nail, peg, or hook. It also conveys the meaning of being nailed or bound together.
-The numerical value of vav is 6.

They are pronounced, in Hebrew, “Yod Hey Vav Hey,” when you read them in the Hebrew manner from right to left.

The four letters in God’s name in Hebrew have the following meanings:

When read in English from left to right, it says: “BEHOLD THE NAIL, BEHOLD THE HAND!” Or, “Behold the nailed hand.” 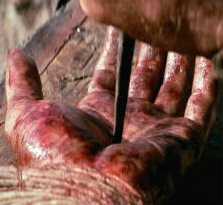 There can be no doubt that the God of the OT is clearly pointing to Jesus Christ in a way that is intimate and personal by identifying Himself with the sacrifice of His own Son.