Im a Christian cynic. Yes it’s true. I admit it.

I’ve heard way too many “prophets” make claims and they don’t happen… and then the failure get’s blamed on people. I’ve heard too many rah-rah sermons about money and whatever. Yes I’m a Christian cynic and it keeps me off the emotional roller coaster that is common in pentecostal and charismatic churches.

So you can image I frown on “prophetic actions”.

Recently I heard that in the 1400’s early Portuguese explorers had planted padrãos (large stone crosses) at certain spots around Africa and they prayed and claimed those and surrounding lands as Christian (in an act of faith).

Of course my curiosity was triggered. The speaker then told me that oil has been discovered at or very near to each of those crosses.

Of course I had to look into this. Would it turn out to be true? I had to find out.

First I found out that the three Poprtuguese explorers were…

Second I had to find a reliable source of where the padrãos were planted.

Wikipedia has a massive worldwide map of Portugues discoveries but it’s too big, too detailed and doesn’t say which discoveries had padrãos planted.

That led me to Ian Packham’s travels were he actually went to visit/see each of them as he travelled around Africa on public transport. You can’t get much more reliable that a guy who actually went to see them.

You can also view his tour on an Animap (animated map) which is very very cool.

Ian made this awesome map in which he combined the padrãos (which he personally visited) with the journeys of Dias, Cao and da Gama and then added his own journey around the edge of Africa. 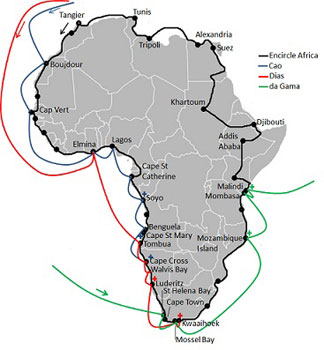 Now I had something to work with!! The actual known locations of at least SOME of the padrãos planted in faith by those explorers. There might be more in Africa and more around the world, but I can at least start with these ones.

Was oil discovered at or very near to each of these padrãos planted in faith?

and you can find more if you search for “lagos oil discovery” and so on. But if there are “oil blocks” then someone has found something and is drilling.

Then – just for you – I edited Ian’s map and put a red underline for each location where I could google “place name oil block” and then find Google Images of those blocks. (NOTE: I only checked Africa and I didnt check northern Africa because the explorers didnt go there)

The evidence is in. Oil was discovered at ALL of the locations. Everywhere Ian went and found a padrãos there has since been a discovery of oil.

If you want to know more about Ian’s trip then visit his website and make sure you visit his animated trip!

If God calls you to make a prophetic action – based on this evidence – I suggest you co-operate with Him and do it. 500 years later who knows what discoveries people will find.