Was there a Garden which God planted in a place called Eden? Really? Surely if there was such a place it would be recorded in ancient history?

Well… let’s take a look at what archaeology says. The bible says that Adam was in the garden which was in Eden (commonly referred to as “the garden of Eden”).

If Abraham was called out of Ur which we know from archeology is in Southern Iraq… and Babylon is also in Iraq but it is slightly further north of Ur (and  Nineveh is further north still)… then the logical progression from the starting point would place Eden somewhere near Ur right? 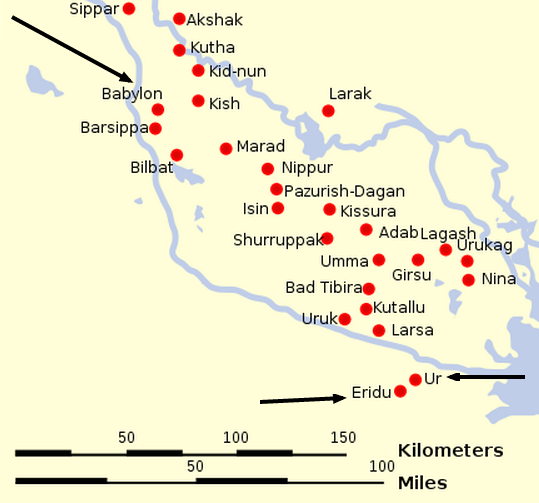 And if such an important first city really existed with the first human beings in it, then all the surrounding cultures would have stories that archeologists will be able to excavate and read about, right?

And if this is the right area then the tower of Babel should be nearby… and as it happens there are TONS of ziggurats (stepped pyramids) in this region.

… according to the cuneiform inscriptions Eridu was reputed to have in its neighborhood a garden, “a holy place,” in which there grew a sacred palm tree. This “tree of life” appears frequently upon the inscriptions with two guardian spirits standing on either side.

So did some further reading in Wikipedia. It turns out that Eridu is 5,300 years old which is the right age in terms of the biblical account.

and you can read the relevant pages online in Google Books by clicking this link. For example here is a comparison of Adam and “adapa” 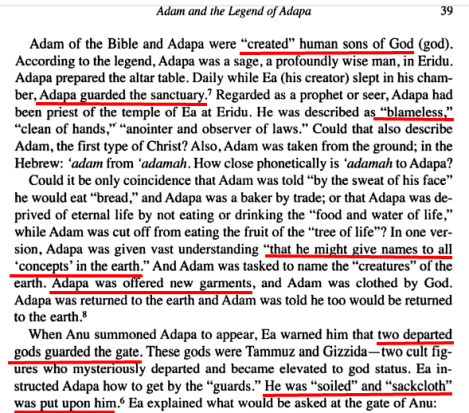 The overlap between the two is so big that they must obviously be the same historical figure.

The author’s website does an excellent job of identifying the rivers that are mentioned in the book of Genesis, showing the Ur and Eridu are in the correct position – even identifying Pishon by studying river pebbles.

First he clarifies the source of the information… and it says…

… so the sources seem to be legit. Are you excited yet?

What do they say about Adam?

In Sumerian, Adam could signify “animal” generically, and specifically “man”. When Rim-Amum was king, a list of slaves was referred to as the adarn-bi.:’ The title, “Son of God,” which often times designated royalty, was recorded on a seal stamp. It maintained a likeness of a seated man who was culled “Adamu.”

In Ugaritic, one of the titles of El, the head of the pan-theon, was il ab adm  “God is the father of Adam.”

Both of these inscriptions are identical to that used of Adam in Luke 3,38, where the genethogy of Christ originates with “Adam, the son of God.”

And what do they say about the fall? Surely such a huge event with such massive repercussions would have been recorded?

Did Adam’s Fall affect following generations? These two lines are part of one Adana fragment:

Ok so Adam brought disease upon mankind, not just himself. That sounds like Genesis too.

The Garden of Eden

What does it have to say about the garden in Eden?

According to cuneiform inscriptions, “Eridu was reputed to have in its neighborhood a garden, ‘a holy place,’ in which there grew a sacred palm tree. This ‘tree of life’ appeared frequently upon the inscriptions often with two guardian spirits standing on either side.”

In the words of Theophilus Pinches writing in 1908: “This Eridu, as we shall see farther on, was the blessed city, or Paradise, wherein was the tree of life, and which was watered by the twin streams of the Tigris and the Euphrates.”

Pinches was close; the Euphrates was the only source of fresh water, the Tigris was out of reach. Further connecting Eridu with biblical Eden, Pinches continued: “it was represented as a place to which access was forbidden, for ‘no man entered its midst,’ as in the case of the garden of Eden after the fall. . . .”

Ok so… let’s recap the archeology.

From several different sources there is evidence of an Adam who was created by God, a fall with disease (death) entering the world, and an actual place called Eden which was a holy place like a paradise but which could no longer be entered because it was being protected by two “guardian spirits” which the bible says are angels.

Remember that you can read some of the pages of that book online at Google Books if you want to learn more.

So to recap… archeology says that there could indeed have been an Eden… and God created a man called Adam in it… and Adam made a mistake and disease was introduced into this world.