So where are the 4 rivers of the Garden which was planted by God in the region of Eden?

We are looking for 4 rivers

In Southern Iraq near Ur and Eridu (read more about those ancient cities and their location here: The Garden of Eden) there is the Tigris and the Euphrates and they still flow today.

So where is Gihon and Pishon?

The Pishon can be identified from the Biblical reference to the land of Havilah, which is easily located in the Biblical Table of Nations (Genesis 10:7, 25:18) as relating to localities and people within a Mesopotamian-Arabian framework.

11 The name of the first river is the Pishon. It winds through the whole land of Havilah. – Gen 2:11

Pishon is in “the land of Havilah”. Havilah is not a city, it is a region… a land that has gold etc.

The sons of Cush: Seba, Havilah, Sabtah, Raamah, and Sabteca. The sons of Raamah: Sheba and Dedan. – Genesis 10:7

Ophir, Havilah, and Jobab; all these were the sons of Joktan. – Genesis 10:29

They settled from Havilah to Shur, which is opposite Egypt in the direction of Assyria. He settled over against all his kinsmen. – Genesis 25:18

And Saul defeated the Amalekites from Havilah as far as Shur, which is east of Egypt. – 1 Samuel 15:7

According to Genesis 10 Cush is clearly in Iraq…

In another location in the Bible,

Judges 3:8 says, “Therefore the anger of the LORD was hot against Israel, and he sold them into the hand of Chushanrishathaim king of Mesopotamia: and the children of Israel served Chushanrishathaim eight years.“

So we have established that Pishon and Cush are in Iraq.

Gihon is in Cush – where the bible says Pishon is too – which we established above is in Iraq.

The name of the second river is the Gihon. It winds through the whole land of Cush – Gen 2:13

There was a river that flowed out of Iran southwesterly toward the present Gulf… which is where Ur and Eridu are. It was called the Karun River and was dammed…

It previously contributed most of the sediment forming the delta at the head of the Persian Gulf.

I Googled for modern day Karun River and it joins the Euphrates in Southern Iraq. Because of the dams it is a small river now. 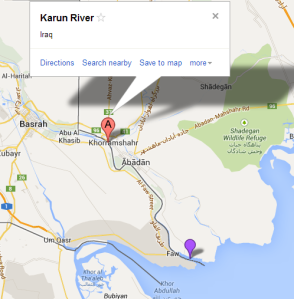 The Karun meets the Tigris and Euphrates slightly below where they join together. Perhaps it met higher when it ran in full force? Also, rivers had their courses changed in history, for example Cyrus changed the course of the Euphrates in order to conquer Babylon – in fulfillment of Biblical prophecy.

The meeting place of these rivers matters because

A river watering the garden flowed from Eden; from there it was separated into four headwaters. – Genesis 2: 10

therefore the four rivers need to join together and be fairly close to Ur or Eridu.

So now we know where Gihon, Tigris and Euphrates are… all meet nearby to each other in Southern Iraq…

11 The name of the first river is the Pishon. It winds through the whole land of Havilah. – Gen 2:11

The most convincing explanation of where Havilah is here: The Garden of Eden: A Modern Landscape Carol A. Hill

Here is a PDF link to her writing.

According to her research Havilah is to the west in modern day Saudi Arabia. The river flowed east. When it last ran in 2008 (you can read about that miracle here) it emptied into the Persian Gulf. But in the past the Pishon entered the Gulf north of Umm Qasr, in the Euphrates-Tigris river basin. The evidence for this is a triangular, fan-shaped, delta.

For more information please visit her page or grab the PDF.

So now we know where Gihon, Tigris, Euphrates and Pishon all are… and all meet nearby to each other in Southern Iraq…

The ancient map may have looked somewhat like this…

And that’s it! I hope you enjoyed.