On Weds 29th October 2008, I heard something tremendous from God. That is the subject of this post. But first I need to re-explain the context, for those who haven’t been visiting recently.

You may have seen the two big and obvious miracles that have occurred. The Aussie rain miracle and the Atlantic Hurricane miracles.

In fact if you were really keen to see His ability, you’d still be visiting the site that covers hurricanes and you’d have noticed that there are currently NO hurricanes ANYWHERE in the world. He is working through other servants to achieve this. Check it out…

Have a look at Tropical Storm Risk.com and see for yourself. I have been checking regularly and day after day there are no storms… and the season only ends on 30th November… it’s still October! The NHC says the last warning they gave was Oct 22nd. Imagine that… no further warnings have been necessary since then. Ask yourself – how this is possible during hurricane season?!

You see, the free gift that Jesus Christ has provided (Rom 6:23) covers everyone. All He requires is that someone receives it. You just need to agree He took ALL our sin, paid for ALL the sin, paid the COMPLETE righteous requirement of the law (Rom 6:23)… and that is the end of that. As He died, He said “Father forgive them” – and He meant it.

And Jesus prayed, Father, forgive them, for they know not what they do. – Luke 23:34

He paid the full price, because the sin of the whole world had been transferred upon Him. He died not just for you and me, but He died for the whole world.

And He [that same Jesus Himself] is the propitiation (the atoning sacrifice) for our sins, and not for ours alone but also for [the sins of] the whole world. – 1 John 2:2

But what He did on the cross (defeat of sin and death, providing life) was for everyone, for the whole world. Paul is very clear about that. It is stated again and again, over and over. All that remains is for us to receive His completed work.

These modern miracles started on Oct 13 2008, exactly at the height of the 2nd worst hurricane season in 150+ years of recorded history.

At the very peak (as Gustav approached) emails went around and a group of us prayed and Gustav stopped in it’s tracks, Ike landed as a Cat 2 (not a 5) and in general the hurricanes fell off and have now ended – long before the season is over. These modern miracles demonstrate that the work of Jesus Christ is already complete and simply waiting to be received.

But that is not all. There is more to come. Read on.

At the risk of being called a complete nut case… I heard something from God on Weds 29th October 2008 and today I heard “I want you to write about it”. What did I hear? Well. It’s actually pretty big. So go get a cuppa and put on your comfy shoes.

You might know that Australia is pretty much a big desert. And what’s worse is that recently it was having a 1-in-a-100 years shortage of water. At the very height of this water shortage, just as the famous river Murray was about to be flooded with salt water to stop it from completely silting up… just at that time God sent enough rain so that crops were saved and the minimum needs were met.

But on Weds 29th October 2008 I felt that God was saying that the lakes in Australia will fill up and the rivers will flow again. I don’t have a date for this. I don’t have any more information. Just like you I will wait for it to happen. But when it does happen, His expectation is that we acknowledge what He has done.

You have heard [these things foretold], now you see this fulfillment. And will you not bear witness to it? I show you specified new things from this time forth, even hidden things [kept in reserve] which you have not known. – Isaiah 48:6

As you can see there is a second part to that scripture, because after He does this – makes the water run – after that time, when He has done it, then He will reveal more and newer things that He plans to do.

So let me say again, until then, until it happens, we simply wait. And when it happens, be prepared to get excited. When it happens, you need to understand and acknowledge that He did something marvellous and we should really sit up and listen to what He has to say to us, because He will speak again of new things…

Therefore once more I will astound these people
with wonder upon wonder;
the wisdom of the wise will perish,
the intelligence of the intelligent will vanish.” – Isaiah 29:14

Knowing that most people are just as cynical and suspicious as I am 🙂 I have recorded my screen as I am writing this post. You can see the date, you can see the browser, the URL (wordpress.com) and the current layout of WordPress 2.5 Crazyhorse UI, note also that the publish status says “publish immediately” – it isn’t set to a custom date (neither past nor future) and wordpress itself has the current date. 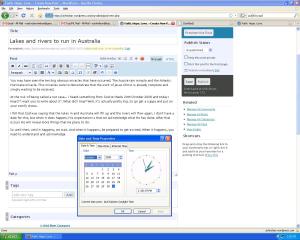 When this happens, it’s not really possible to be in denial that He said it will and it did. Then give Him praise for that. Thank Him. And then get ready for new instructions. I keep saying, it’s a great time to be alive.

So what about the financial storm? Why isn’t it stopping? Well… I haven’t heard any Christians send frantic emails around requesting prayer for the storm – unlike for when Gustav was about to hit.

But besides that, everyone (and especially we Christians) must eagerly look forward to the eventual end of this financial storm, because at that time His Spirit will be poured out. It’s a very exciting time to be alive! Sorrow and sighing is about to flee away (Isaiah 35:10).

For those who are afraid of change, don’t worry. Democracy, capitalism and the freedom to worship whoever/whatever you want to… all of that remains. But it’s the end to the hegemony of sin and death. (PS: I hope you use your freedom to choose to believe in Jesus Christ!)

I mentioned in a previous post that God had said there was a catastrophe coming. I didn’t know how long it would take to come, but I had an idea it was financial. I think I have mentioned in previous posts that I believe Isaiah had the clearest view of these times we live in. Let me summarize Isaiah 32. Where I put “…” are other words and verses that related to these verses. They expand on them.

Isaiah 32:10 In little more than a year you will be shaken with anxiety, you careless and complacent women; for the vintage will fail, and the ingathering will not come. …

Isaiah 32:15 Until the Spirit is poured upon us from on high, and the wilderness becomes a fruitful field, and the fruitful field is valued as a forest….

The long and the short of it is this. God foretold this financial catastrophe 2500 years ago and told me about it “a little over a year ago” as I said in my post. I was freaked out and confused and everthing that comes with low self esteem. As you can imagine. Then… just as He said 2500 years ago, it came to pass “in a little more than a year” and the incredible thing is that it will last UNTIL the Spirit is poured out from on high.

During that “little more than a year” He provided water in the wilderness of Australia, giving water to the farmers. I know full well that the drought is NOT broken by 3 months of good rain. The immediate need for the harvest was met, but the long term deficit in the water table remained.

And I also know that many people will ask… was that God? Surely this guy is a fruit cake and a nut. In fact 2 weekends ago a pastor  – who has never had a discussion with me – spent 40 minutes publically saying to his congregation (with me in it) that I am involved in witchcraft and that I’m listening to doctrines of demons (1 Tim 4:1). It was humiliating for me, because many of them looked at me with confusion.

So I challenge you, the reader, to wait with me and see. Does God cause the lakes to fill? Does the Murray run again? Do the other rivers run? Or am I a nut, listening to… ah, let’s just leave it at that shall we?

But as for me and my house, we will continue to serve the Lord…

And if it seems evil to you to serve the Lord, choose for yourselves
this day whom you will serve, whether the gods which your fathers
served on the other side of the River, or the gods of the Amorites, in
whose land you dwell; but as for me and my house, we will serve the
Lord. – Josh 24:15

I will keep writing every now and then about what Jesus Christ has done for you and me. I will keep praying for the healing of people. I will keep receiving what He has done.

And I will keep waiting excitedly for that day when I read a newspaper that says the rivers are running and the lakes are filling. When that happens, I THINK, the end of the financial stuff is at hand, we are near when His Spirit will be poured out, we are near a time when He will again do marvelous things in this world and new things.

One last thing… this is about HIM

May I just add, please don’t email me and try to get the inside gossip. I have shared what I have heard. Just like you, I am simply waiting.

And I am sure He’d like to work through you too, if He isn’t already. There is a cost… people may reject you, you may have to walk alone and that takes heaps of courage. May God bless you.

This is a part of a series…

10 responses to “Lakes and rivers to run again in Australia”